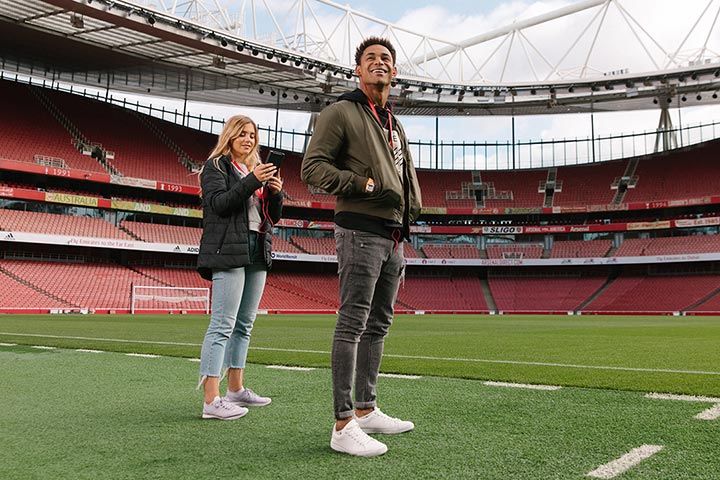 Journey into and explore the unique, unrivalled and unforgettable Emirates Stadium. Go on an all access behind-the-scenes tour where you will have the opportunity to walk in the footsteps of your heroes, listen to their matchday experiences and explore never-before seen footage. Picture walking down the players' tunnel and experiencing the ultimate rush of excitement as you re-trace the steps which legendary players such as Ian Wright, Charlie George, Dennis Bergkamp, Thierry Henry and Theo Walcott have all walked. Imagine the nerves and excitement they feel as they inch closer to the pitch on game day, furiously cheered on by the roar of 60,000 screaming fans. You will be guided around the stadium with the help of a state-of-the-art audio-visual handset. This tour will take you behind-the-scenes of one of the world's greatest footballing clubs, giving you access to areas normally reserved for players and officials. The tour includes:- Going pitchside- Walking the players' tunnel- Visiting the changing room- Visiting the media centre- Free Arsenal branded headphones- Free personalised tour certificate- Discovering heroes, history and much moreThe tour will finish with free entry to the Arsenal Museum where you will be free to browse at your own leisure. The refurbished museum offers visitors the chance to take in a number of exciting exhibits. Many of the items on display were kindly donated by former players who hold a special place in Arsenal's history. Highlights include Jens Lehmann's goalkeeper gloves that he wore for every league match of the unbeaten 'Invincibles' season in 2003/04, Michael Thomas' boots from Anfield '89 and Charlie George's FA Cup Final shirt from 1971. The museum also features two impressive video theatres and twenty major displays based on Arsenal's proud history.Looking for somewhere to grab a bite to eat after your tour? Why not visit Chapman's (located outside the Armoury Store), serving a wide selection of food and drinks including teas and coffees, sandwiches, paninis, wraps and much more.

An adult is classed as 16 years old, under 5s go free. You will need to be mobile as some locations

Take a look at these other related Football experiences for some more ideas.